This post is a step by step tutorial on installing Theano for Windows 7, 8, and 10. It uses Theano, CUDA, and Anaconda.

Anaconda is a package manager for python that simplifies setting up python environments and installing dependencies. If you really don't want to use Anaconda, check out my older post here.

Let's get to it:
Now you'll be able to use Theano when you activate your conda environment.

Note: For pycharm users, PyCharm does not automatically activate the conda environment for you (bug submitted here). What you can do is just create a .bat file with these contents:
call activate env_name
path_to_pycharm\bin\pycharm64.exe

Let me know any questions or comments below.
Posted by IslandMan93 at 4:41 PM 35 comments:

Deep Q-Learning is regular Q-Learning with a slight twist. The best definition of Q-Learning is at StudyWolf. There are 4 articles related to reinforcement learning and I would suggest to read all of them, they are easy to understand and very hands on. For those that don't want to read the article, or are familiar with reinforcement learning the basic definition is:
Q-Learning is a lookup table, all states (S) the agent encounters are stored in this table. When the agent receives a reward (r) the table is updated. It sets the reward value of that action (a) in that state to the reward. Then (as common in reinforcement learning) goes backward and updates the previous state/actions values with the discounted reward (q[s-1] = r*discount). Note: if you're like me and learn from code, I've written quick code at the bottom of this page to show a basic q-learning model.

DQN changes the basic algorithm a little bit. Instead of keeping a table of states, we treat the network as the table. So at each timestep we ask the network to compute the values for actions, the action with the highest value is chosen by the agent (according to an e-greedy policy). E-greedy selects a random action (instead of the highest valued one) with probability (E). When it comes time to train, the only signal the network is given is a positive or negative reward (it's not fed manually discounted values like with temporal difference). For all the states that don't have rewards the network is asked to compute what it thinks are the reward values for the next state (S t+1). Then these predictions are multiplied by the discount and used to train the network. Code for this is on GitHub in my python-dqn project under handlers.experienceHandler.train_exp(). So the signal actually given to the network is only the positive or negative reward, nothing else.

If you have a lot of time to train this algorithm will converge on a good solution hopefully memorizing when it will be rewarded and inferring what actions will get it rewarded in the future.

The issue is the 'a lot of time to train' part. DeepMind ran 5,000,000 updates to get the results they found in their paper. With one update every 4 frames that's 20,000,000 frames!
My implementation is slow (cuda_convnet and windows is still a problem I need to fix which should give about 20% speed up) at about 20FPS on a GTX970 with an i7 (this is when the agent is losing most games quickly so average FPS would be lower). So after 23 days I could get an agent that plays breakout better than a human. David Silver said it took days for them to train so my implementation may not be that bad.

The real question is what are we missing? Why does it take so long? In the next post I'll talk about some ways I believe will improve training and explore these issues in further detail.

Last time I wrote about configuring Theano with Windows 7&8 64-bit. Now lets do something fun with it.

Recently, the Arcade Learning Environment (ALE) has become really popular in the machine learning field. Google's Deepmind group integrated reinforcement learning and convolutional neural networks into an AI that can learn to play Atari Games. Original article is here. There are some really cool YouTube videos of their approach learning to play games, I'd suggest checking them out.

This post will be the first in the series of replicating their approach. In this tutorial, we will get ALE running and get it set up with Python. Of course, it's not going to be as easy as using Linux, but we all use Windows for our own reasons.

Thankfully, a lot of the legwork for this integration has been done for us by various people and this tutorial should take much less time than the last.

Note: Almost all of the work on the Visual Studio project comes from Martin Brazdil's (my code is forked from his library). The integration from C++ to python (Ale_python_interface) comes from Ben Goodrich at https://github.com/bbitmaster/ale_python_interface. My code here just combines these and makes necessary modifications for it to work in Windows (and some bug fixes).
This wraps up this tutorial. To run, start the breakout_dqn.py program and let it run (currently it's configured for 2000 games, it takes ~1 day to run on GTX 970 and i7. I'm planning on doing a livecoding.tv walkthrough of the project soon.

Here are the current best results I've gotten after 4000 games. Note that losing a life is -1 reward so add +5 (total number of lives) to the score to get the number of bricks broken. The best is 17 bricks which happens twice, once before 2000 games and once right after. 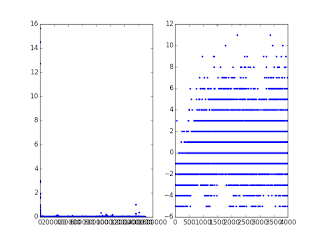 Update: I wrote a new post that uses Anaconda instead of installing Mingw directly. This way you can keep the path variable clean and makes installing numpy/scipy much easier. http://www.islandman93.com/2016/04/tutorial-theano-install-on-windows-7-8.html

I'm in love with Python and I always use the latest version of everything so I'm stuck with 3.4. I use Windows for reasons... This presents a problem for machine learning. Theano is not too easy to install on Windows.

I wrote this tutorial to help others get a working Python 3 version of Theano on a Windows 7 64bit PC. It's not meant for the faint-of-heart and will probably take a decent amount of time to download and install everything but in the end it's worth it.

Now you'll be able to use Theano under any environment. Use PyCharm, it's the best.

Let me know any questions or comments below.
Posted by IslandMan93 at 6:45 PM 18 comments: